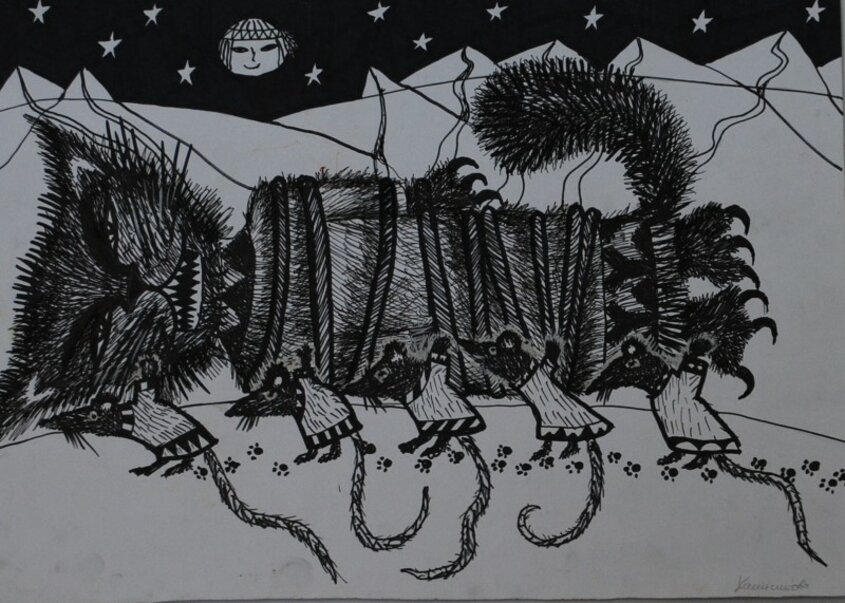 Once upon a time lived seven mouse brothers. They lived in a tiny yurt the size of a hand.

One day, they woke up and saw that the snow had piled up during the night: the walls weren't visible anymore! The brothers made shovels out of wood and started cleaning up the snow. They worked tirelessly all day, which made them quite hungry in the evening.
And suddenly, right there, where they had just raked away the snow, they all saw a piece of butter. It was right in front of their youngest brother's nose. Before everyone could open their mouths, he ate this bit of butter.

The oldest of the brothers started shouting:

- What did you do? You ate everything yourself! I'll eat you up!

Right under the eyes of the terrified other mouse brothers, he jumped and gulped down the youngest of them entirely, not even leaving out the tail. The five other brothers then jumped on him, tied him up and dragged him to the khan's court. It was a long and tiring walk until they made it to the khan. The tied-up brother was left at the door, while the others entered the royal yurt.


The khan, who was majestically sitting on his throne, amusedly looked at the sweaty and breathless mice.

- We've come a long way. We went through seven rivers and seven passes - the mice replied.

- That's quite obvious looking at your tongues all sticking out! - the khan remarked.

- There were seven of us - said the mice.

- Oh, how many! - the khan started laughing.

- We had our own yurt the size of your palm - said the mice.

- While we were cleaning up the snow, our youngest brother found a piece of butter and ate it. And then our oldest brother swallowed him entirely! He didn't even leave out the tail!

- We tied him up and dragged him to your court. He's behind the doors. He's quite big. When we found him, he was quite small, we took him in and started calling him our youngest brother, but he grew faster and bigger than all of us, so soon we began to call him our oldest brother. He got so huge he no longer slept in the yurt, but outside of it.

- Drag him here - ordered the khan.

And he started to untie the blades of grass that had served to tie up the cat.

- Khan, how are you going to punish him? - asked the mice.

- Well, I'll untie him and let it go. He did a good thing by eating a mouse! And may he eat you all! - shouted the khan.

The mouse brothers, terrified, ran away in all directions. The khan made their "big brother" his own cat.

The cat's not been friends with mice since then. He remembers how they dragged him all tied up through seven rivers, seven passes, to be judged by the khan.
The mice were offended by the khan's defense of the criminal cat and started robbing him of his grains, flatbread, lard and butter.

That's how since then cats and mice became enemies of each other.