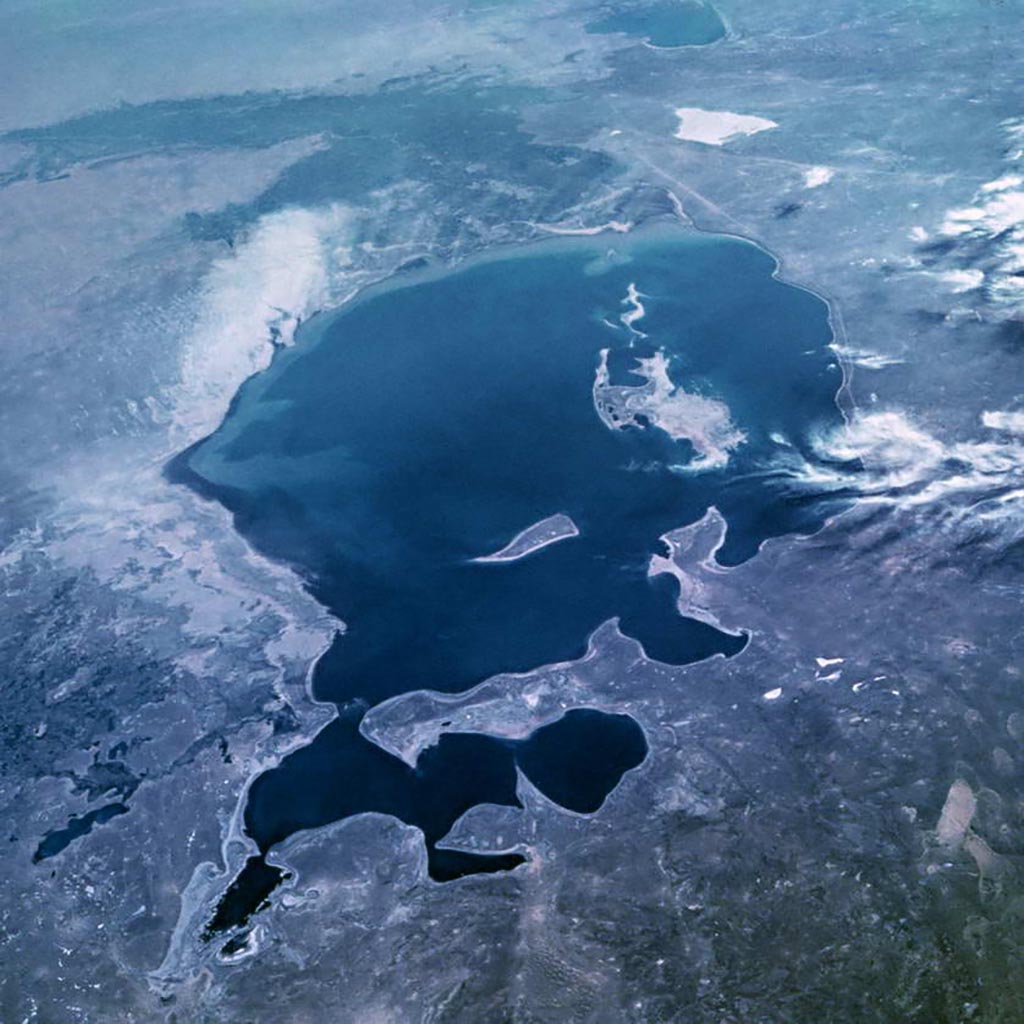 The Aral sea is (was?) a saltwater lake situated on the border between Kazakhstan and Uzbekistan (the northern and southern part respectively are located in these two countries). Just a little smaller than Lake Victoria, it was once the fourth largest inland body of water on Earth. In its natural state, it was 53 meters above sea level, 428 kilometers long, 234 kilometers wide, with a maximum depth of 69 meters and a volume of 1064 cubic kilometers.

The Aral sea was formed towards the end of the Neogene Period (about 2.6 million years ago) when the depression was filled by water, partly from the Syr Daria river. It was apparently dry during the early to mid Pleistocene. It filled up again in the early Holocene thanks to the water of the Amu Darya, which had deviated from its original course. It dried up briefly as well during the 3rd and 1st centuries BCE, but until the 1960s, the flow of Syr Darya and Amu Darya rivers maintained its level.

The name "Aral" comes from Kazakh арал (Uzbek: orol), which means "island" (it also has this meaning in many Turkic and Mongolic languages). It referred to the numerous islands that were scattered across the lake: more than a thousand of them. One of the most known is the island of Vorozhdeniya (Ворождения остров, "Rebirth Island"), on which biological weapons were tested by the Red Army since 1936. In 1948, a secret bioweapon laboratory was established on this island and the neighbouring Konstantin Island, and renamed Aralsk-7 in 1954. In 1971, an incident occured that wouldn't be reported until 2002: a strain of the smallpox virus was released, killing three people and sickening ten. Anthrax spores and bubonic plague bacilli were also buried on the island, and only decontaminated in 2002. After the fall of the USSR, Kantubek was evacuated and became a ghost town.

In the 1960s, large-scale programs for the development of land were carried out in the region and the waters of the Syr Darya and Amu Darya were redirected to irrigate the cotton fields and farmlands that were numerous in the region. The level of the Aral sea started lowering. Without the two rivers to keep the water flowing in, the reservoir started evaporating. By the 1980s, in summer time, both rivers were dry, and around 1989, the sea was finally divided into two parts, the Greater Sea in the south and the Lesser Sea in the north. The salinity in both had tripled since the 1950s. In the 1990s, the area of Aral Sea was now barely 33.800 square kilometers (counting the two parts), its level had dropped by 15 meters, and by the end of the century, it was now split in three lakes. The Greater Aral was now split into a western and eastern lobe and at the north remained part of the Lesser Aral. In the 21st century, the state of the sea kept getting worse. Between 2006 and 2009, the eastern lobe had nearly dried up, to finally dry up altogether for periods of time after 2010.
(Note: Currently, as I'm writing this in 2022, the eastern lobe may or may not have refilled a bit. In 2021, it appears to have completely dried up. The little heart appears to have dried up too.. 💔)

The disaster of the Aral Sea has multiple facets. The ports of Muynaq (Uzbekistan) and Aralsk (Kazakhstan) are now very far from any kind of water. Rusting abandoned boats are scattered in this new desert. The fish have died. In the Aral sea were once caught plentiful of sturgeons, carps, babels, roaches, and exported all across the Soviet Union. The climate changed, with the winters and summers both becoming more extreme. But not only that. The disappearance of the sea also affected the health of the people living around its former shores. The hardest hit were the Karakalpaks, whose territory, Karakalpakstan (an autonomous republic within Uzbekistan), in which the southern part of the Aral was located. With the seabed being exposed, it also exposes all the salt, fertilizer and pesticides residues, which when carried with the wind become a dangerous, toxic dusty wind. Among these pollutants are polychlorinated biphenyl (PCB) and heavy metals. Health problems such as throat cancer (but in general cancer), endocrine disruptions, neurological disorders, anemia, kidney diseases, miscarriages and infant mortality skyrocketed among the inhabitants of these regions. The tragedy in that is, even the mothers' milk is contaminated, making it toxic for their own babies.

The future of the Aral sea is uncertain. Uzbekistan seems to have abandoned it. The waters of the Amu Darya are still used to irrigate cotton fields and there is a project to explore potential oil resources in the dried seabed of the Southern Aral. Kazakhstan, on the other hand, has slightly revived the Northern Aral Sea. There was a plan to construct a second dam in 2009, postponed to 2011, then a canal to bring back some water to Aralsk, but it appears the whole thing is stalling. There are also plans to raise the Kok-Aral dam by 6 meters, but none of these have begun. Some people also fear for the state of the Kok-Aral, which could possibly break from the excess water. There are also plans to plant saxaul trees on the bottom to try and stop dust storms, as well as expanding the water mirror. Unfortunately, given how slow to react the governments of both countries are, and how it seems to be all talk and no action, I'm afraid we won't see the Aral Sea filling up anytime soon... if not ever.

Will the Aral sea ever come back? We can hope, but it's most likely not going to happen in our lifetime. We "regular people" have no control over this. If this website still exists by the time the sea is returning, I hope this serves as a reminder of these dry times... and as a lesson on not to trust your politicians to take any action (because the truth is, they only care about their money and power) and especially what not to do with your environment. 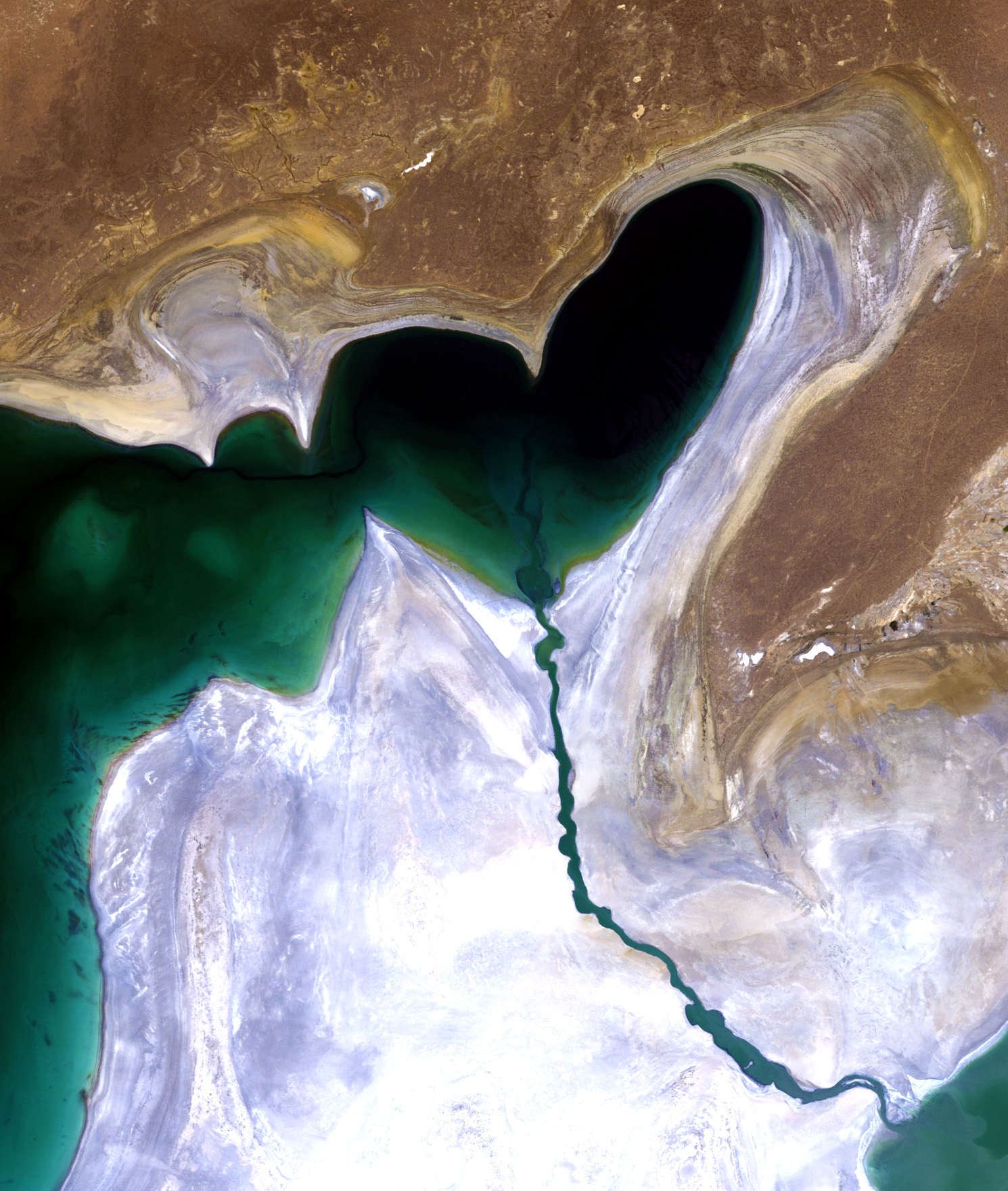